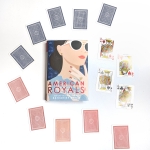 What would the United States be like if we were a monarchy? This is the book that puts that to the test as it follows the present day American royal family, the Washingtons. Yes, that is right. General George Washington became America’s first king after the Revolutionary War. King George IV and Queen Adelaide have three children, Princess Beatrice (the next in line for the throne GIRL POWER!) and twins, Princess Samantha and Prince Jefferson.